A weekend trip review to the island of Roatan, Honduras!

Dave, Chris, Sonia, and I went to Roatan, Honduras over the weekend–the goal being to add another country to our of our lists as none of us have been there, and to compare it to Placencia, as it has a lot of the same features. 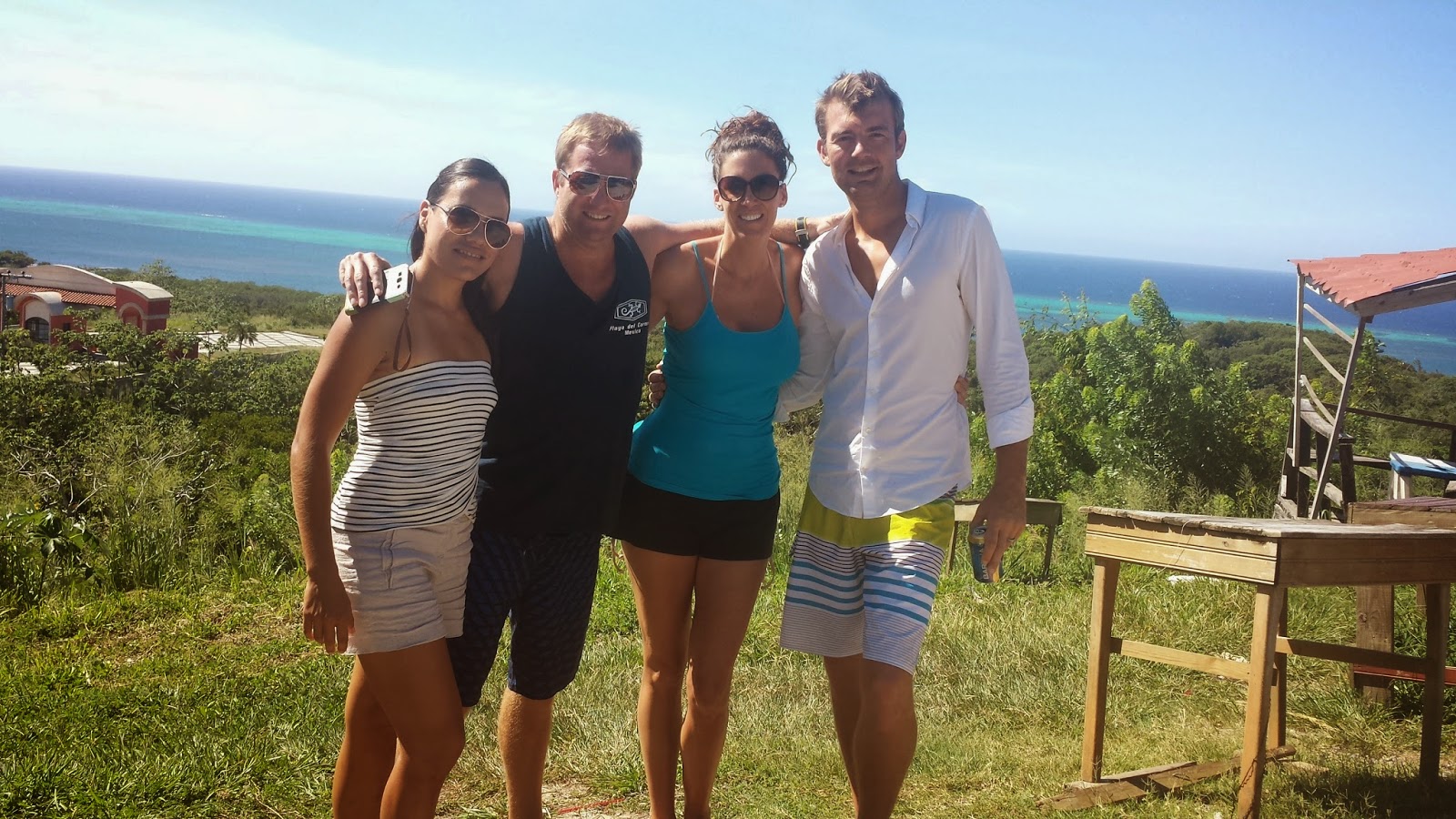 Honduras gets a bit of a bad rap online as being very dangerous; the highest murder rate in the world. We did not go to the mainland for this reason; we heard enough reviews from other travelers that unless you go with someone who knows what they are doing, you might want to stick to Roatan. I can’t speak for the mainland (although I have heard it is quite inexpensive but a lot of poverty) and we will go at some point-but we only had a quick weekend so there wasn’t time for all of it.

It is a bit hard to travel around Central America in that your options are, rent a car and drive where there can be stops/roadblocks that you can’t always know to be legit (and you shouldn’t really drive at night anywhere due to road conditions and safety, take a rickety bus that is not for the faint of heart, or fly on the puddle jumpers, which is pricey. There are ferry options but when you get to the mainland you still have to find a way to the main cities which can take a full day in some cases. You need to have an abundance of time, energy, patience, and a sense of adventure for most options–we chose to fly this time for time’s sake 🙂

We flew on Tropic Air Friday afternoon to Roatan, and it was gorgeous as you fly in–it is hilly, green, and has beautiful turquoise water. The airport looked first world, few crowds due to low season right now. We got right in a cab and went to West End–there are many neighborhoods and over 100,000 people on the island alone (that is almost 1/3 the population of Belize!) on an approximately 25 mile island (about 1-2 miles wide). West End is the most touristy section–safe, you can walk to everything, a lot of fun to be had. Our main concern was being able to walk to the beach and to the fun downtown area, and I would recommend this neighborhood for that. West Bay is close by and also has a walkable area, but not as big. It has resorts higher up in the hills so the views are great, but a lot more hill walking.

**Please note, some of the pictures I used I had to snatch from google because some of my pictures didn’t turn out, but they were images that represented reality 🙂 )

How it looks as you fly in: 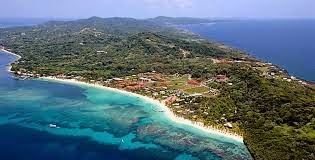 We stayed at Sunset Villas, it was very nice and reasonably priced–two king sized bedrooms, two bathrooms, in a nice condo unit with a view of the pool and sea. 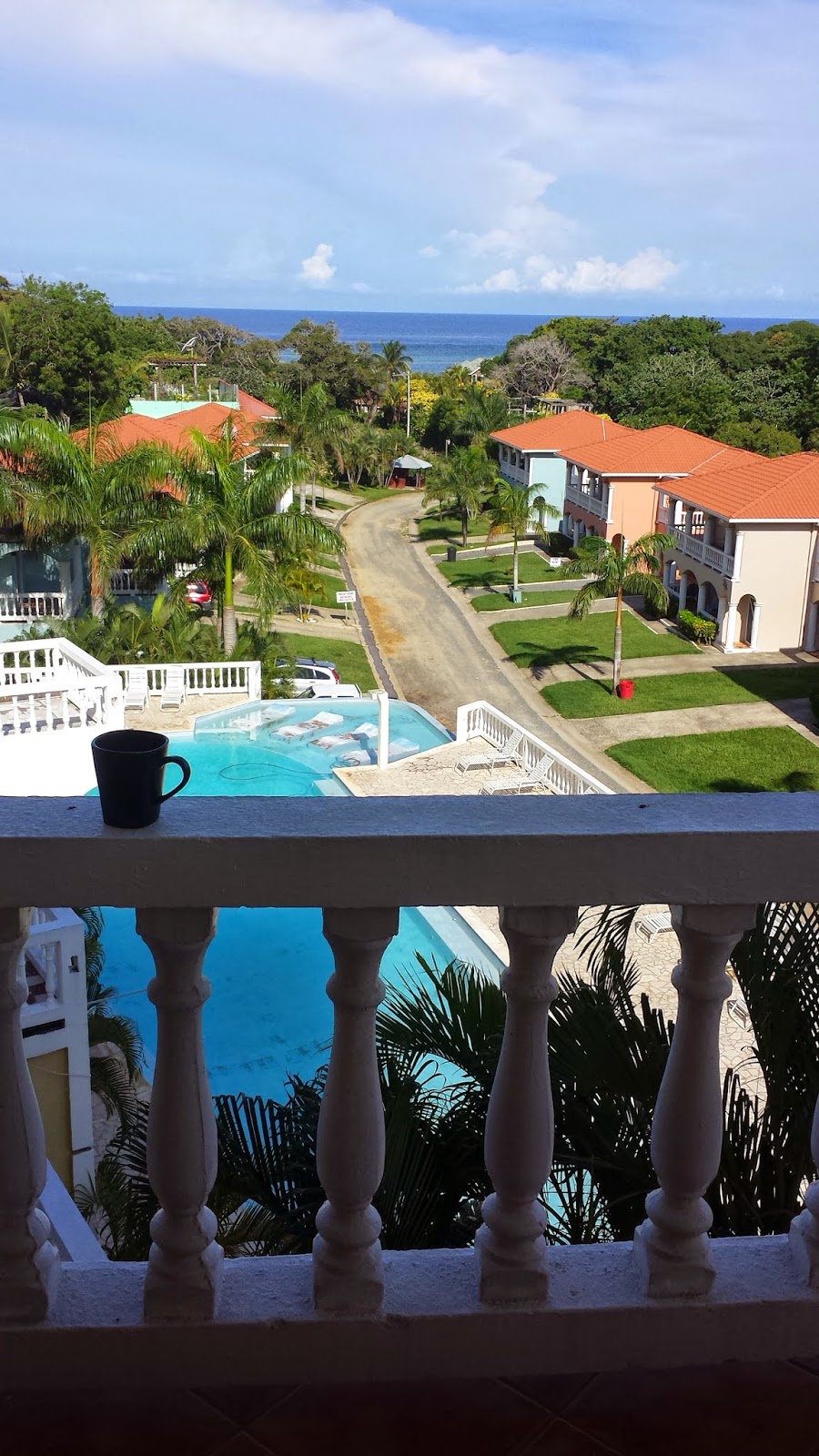 We all felt that the downtown area was really fun, very festive, beach-town, everything right on the shore. It has a slightly more developed feel than Placencia, more chains, everything was in English (Honduras is Spanish speaking on the mainland but Roatan was run by the English at one point, and the Kriol English stuck). I think we were expecting it to be more rustic and more exotic or Spanish feeling than Placencia, when it was far more tourist-centered. In Placencia, everyone hangs out together, there are not really tourist parts and local parts (it is a lot smaller-but gives you a more authentic feel as well). We felt safe the entire time and there were all ages hanging out together, and we explored the entire island. I cannot imagine feeling unsafe at any part of the island, we even drove right through many small towns and villages where we were told were maybe a bit rougher. One other comparison is that Roatan is thick with greenery and Northern-looking trees–in Placencia you see water, beach, and palm trees everywhere you look. Roatan had more oak and pine trees (at least that is what they looked like to me!), less water views than Placencia, less palm trees. Here are a few pictures of Sunset Villas and mains street in West End: 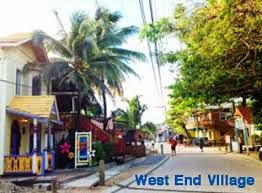 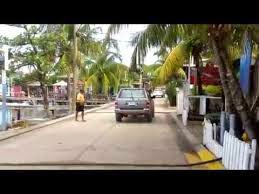 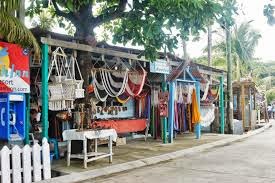 We swam in Half Moon Bay Beach–very clean water, no waves, in a bay (hence the name), great views of the hills around. It looks and feels very exotic, Central American/Caribbean. Placencia’s beach by comparison is much bigger/wider, we do have more sea grass problems, but we also have relatively big waves for the Caribbean, which I prefer, but everyone has their preference: 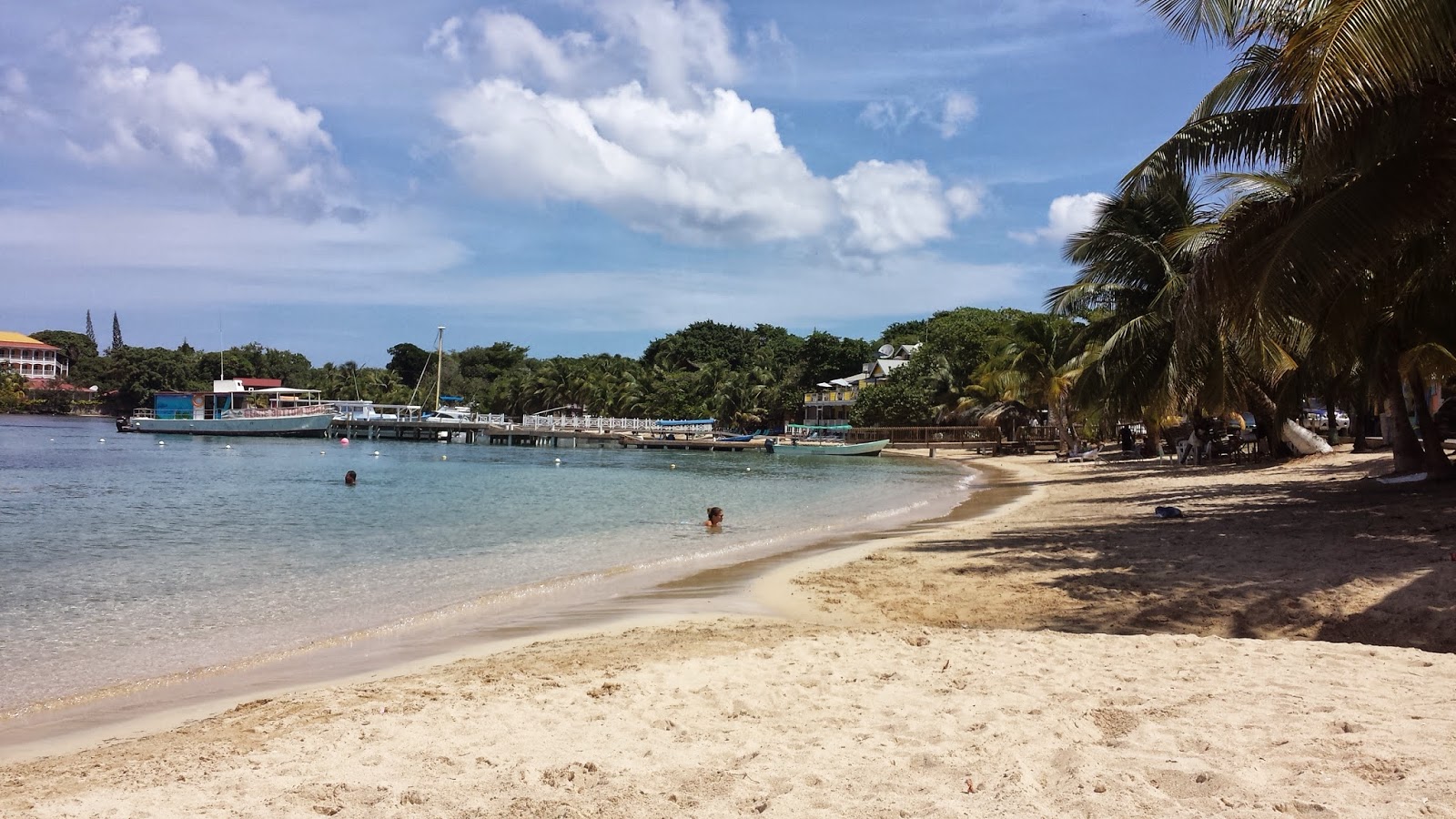 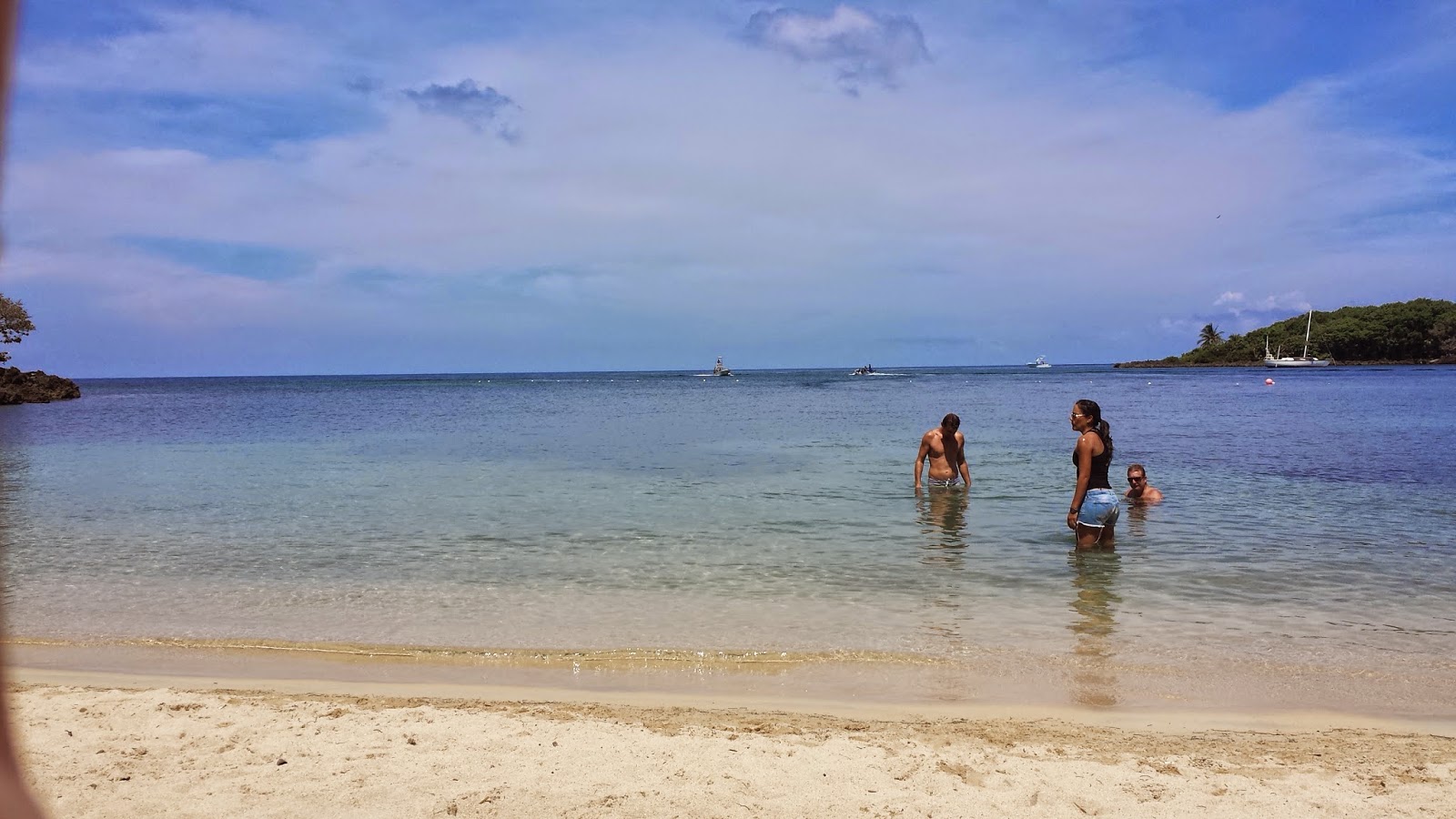 On Saturday, we rented a car for $50 us for the day, and spent the day touring the island. I highly recommend this–renting bikes was impossible to find, and I can see why–between the hills and the fact that there are no sidewalks, it would be dangerous to bike. You can see the whole island if you rent a car, and as long as you can tolerate skinny roads with a lot of turns, most anyone can handle it. There are only a few main roads and you can’t get lost.
We went to the Iguana Sanctuary, which was SO MUCH more fun than it may sound :). You walk in and a great group of people, Susan and Sherman being two of them, will tell you anything you want to know about iguanas, monkeys, fish, lobsters, boats, etc. We were able to feed the iguanas, and as you can see from the pictures, it was scary and freakish to have hundreds of dinosaur looking creatures, stepping all over each other to get at you and your leaves: 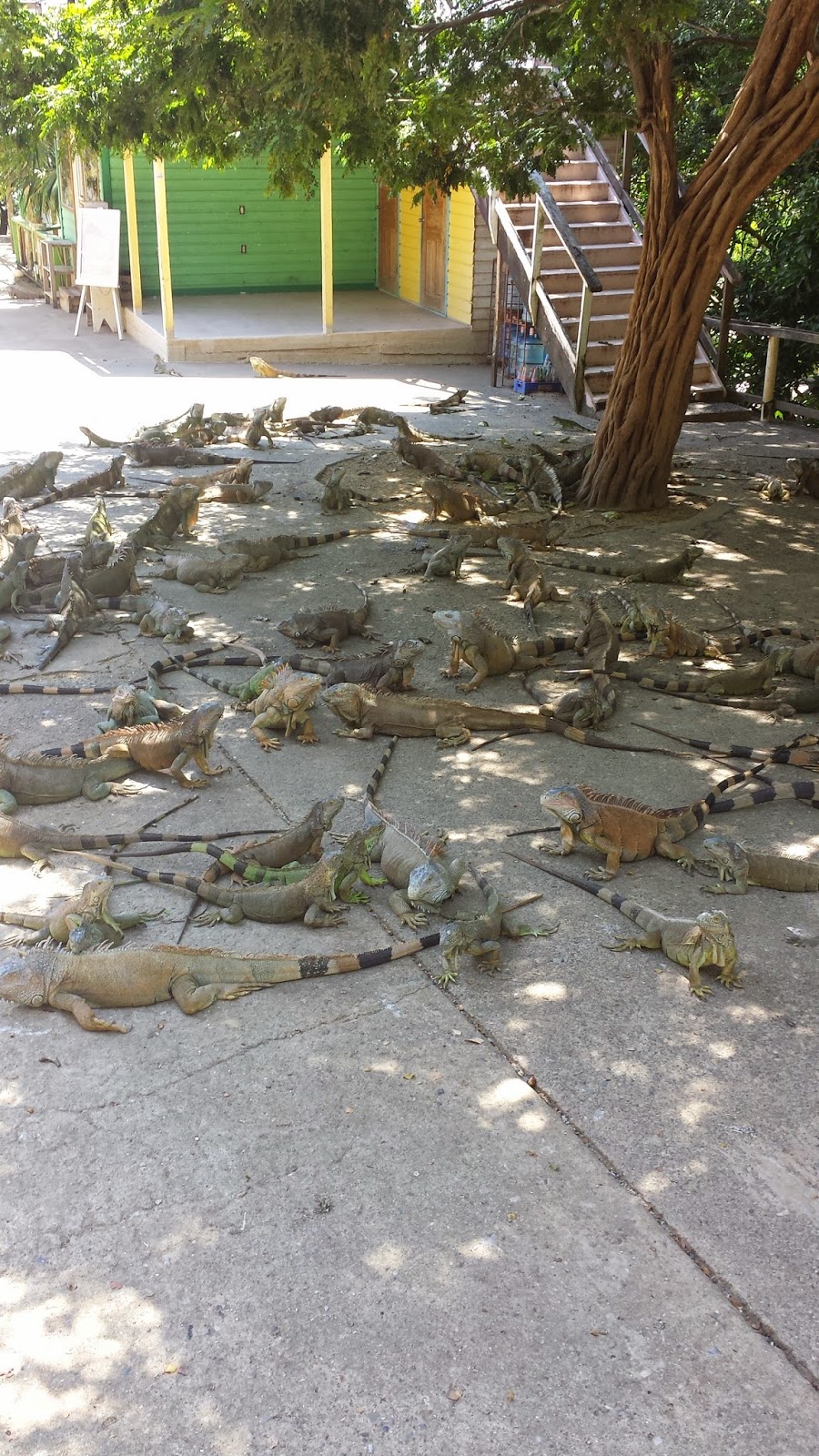 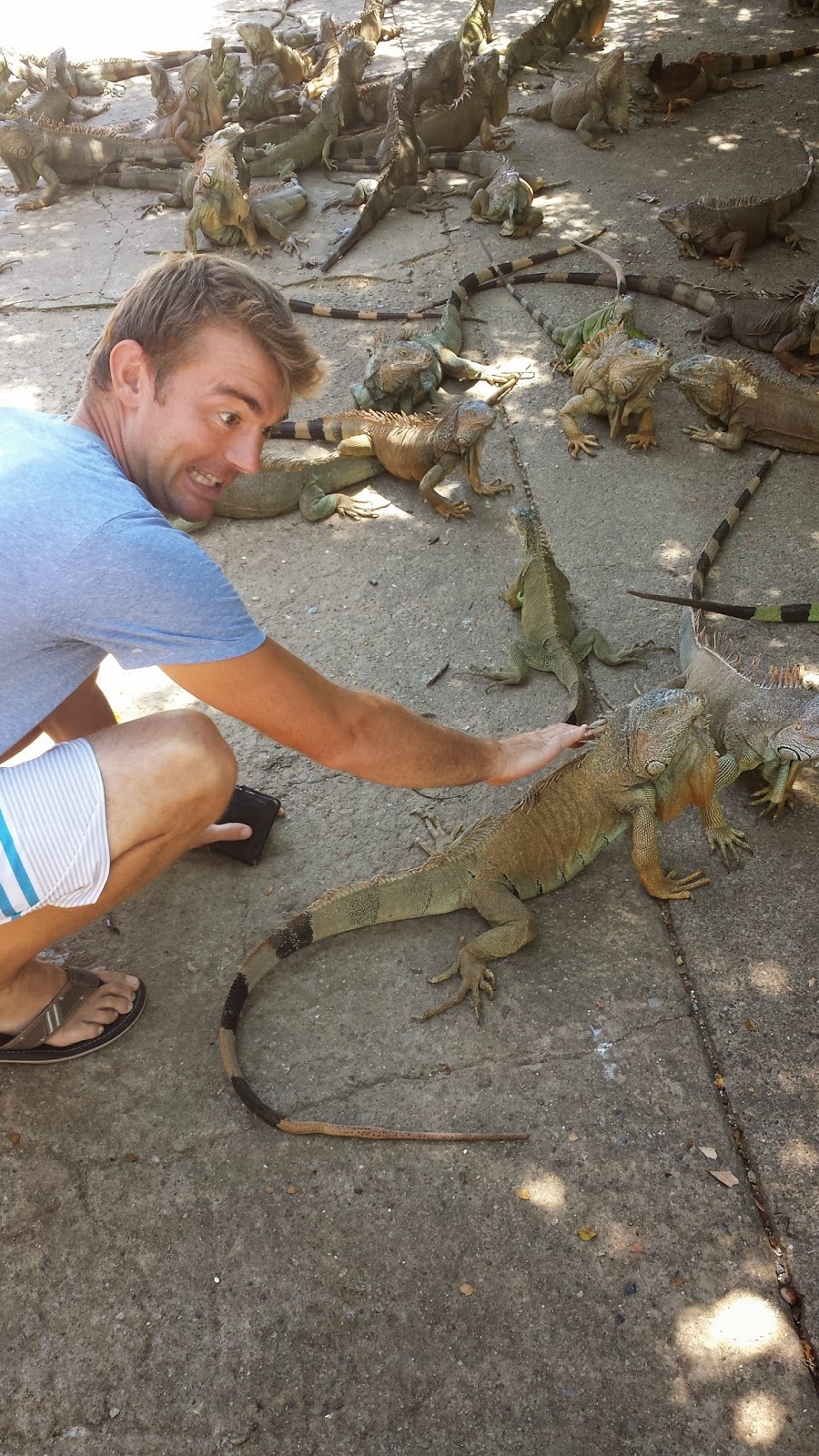 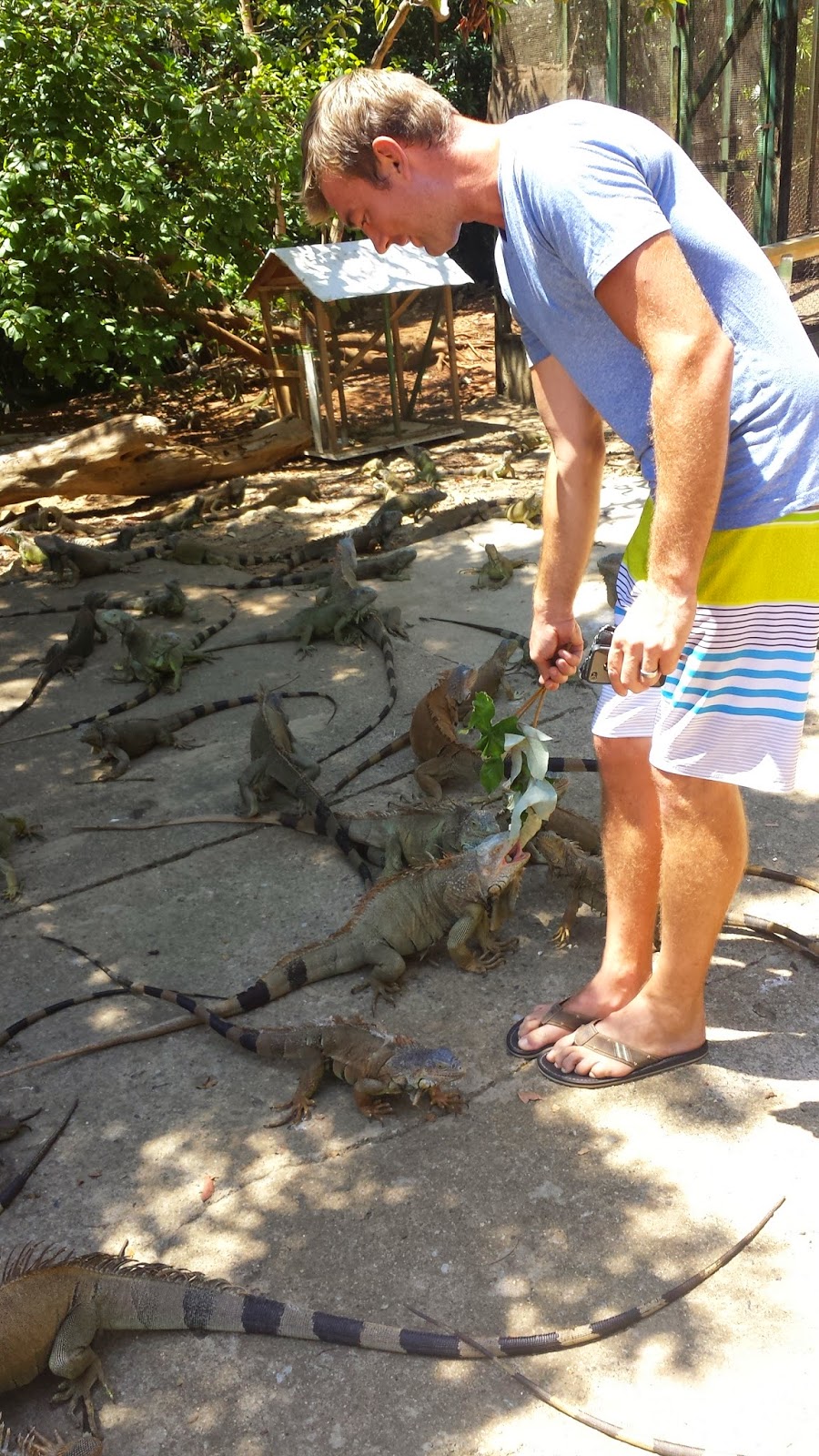 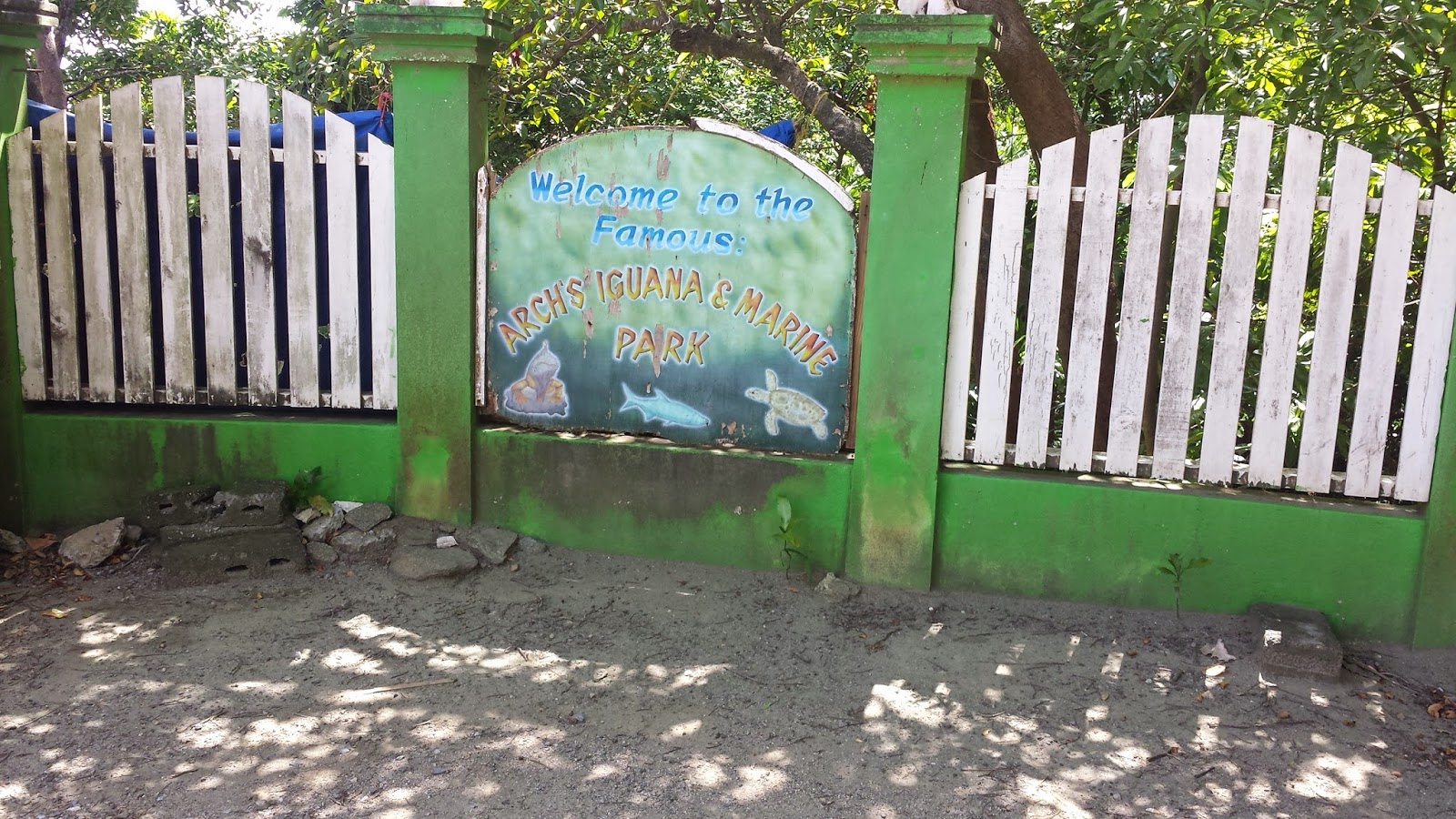 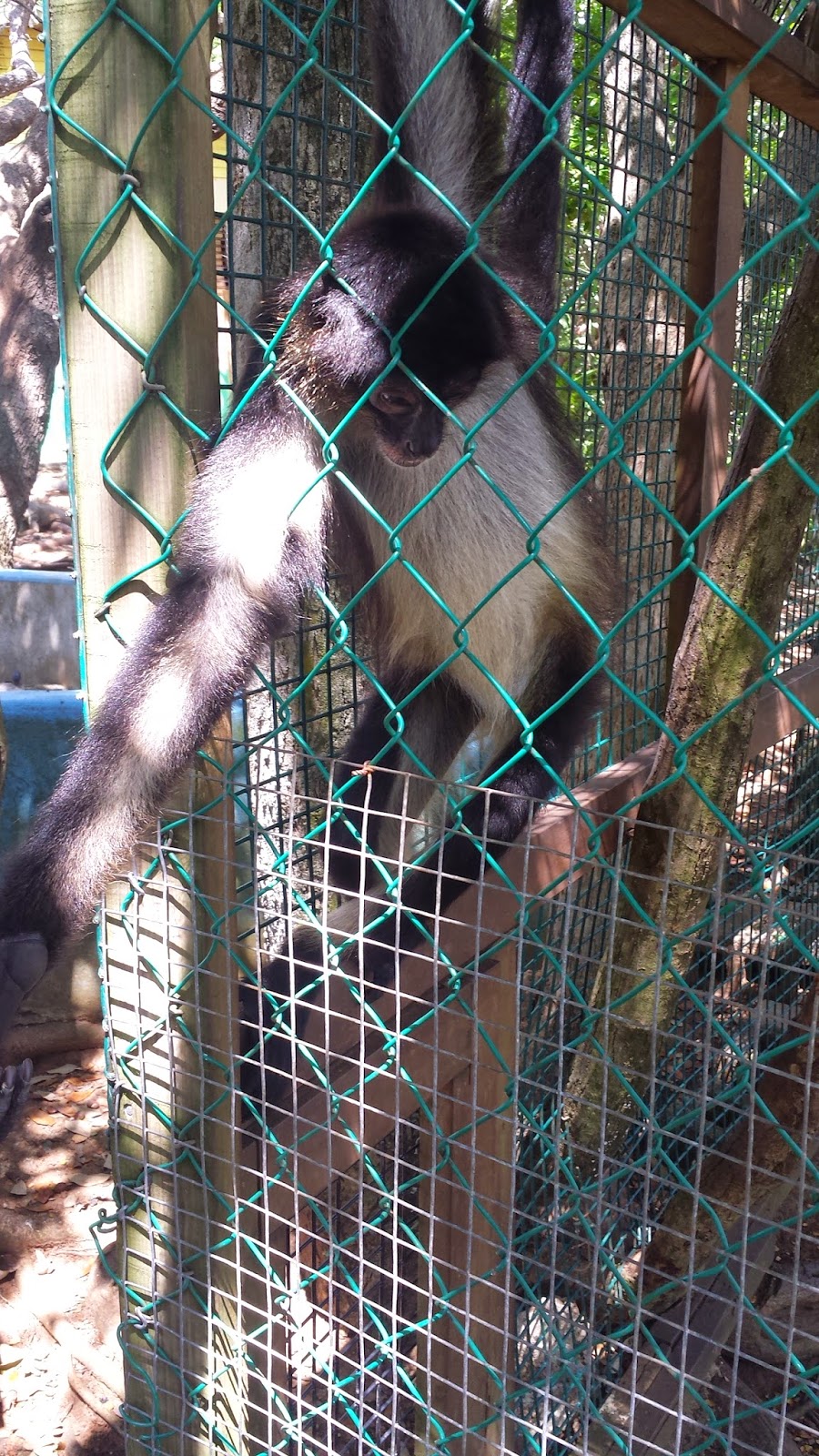 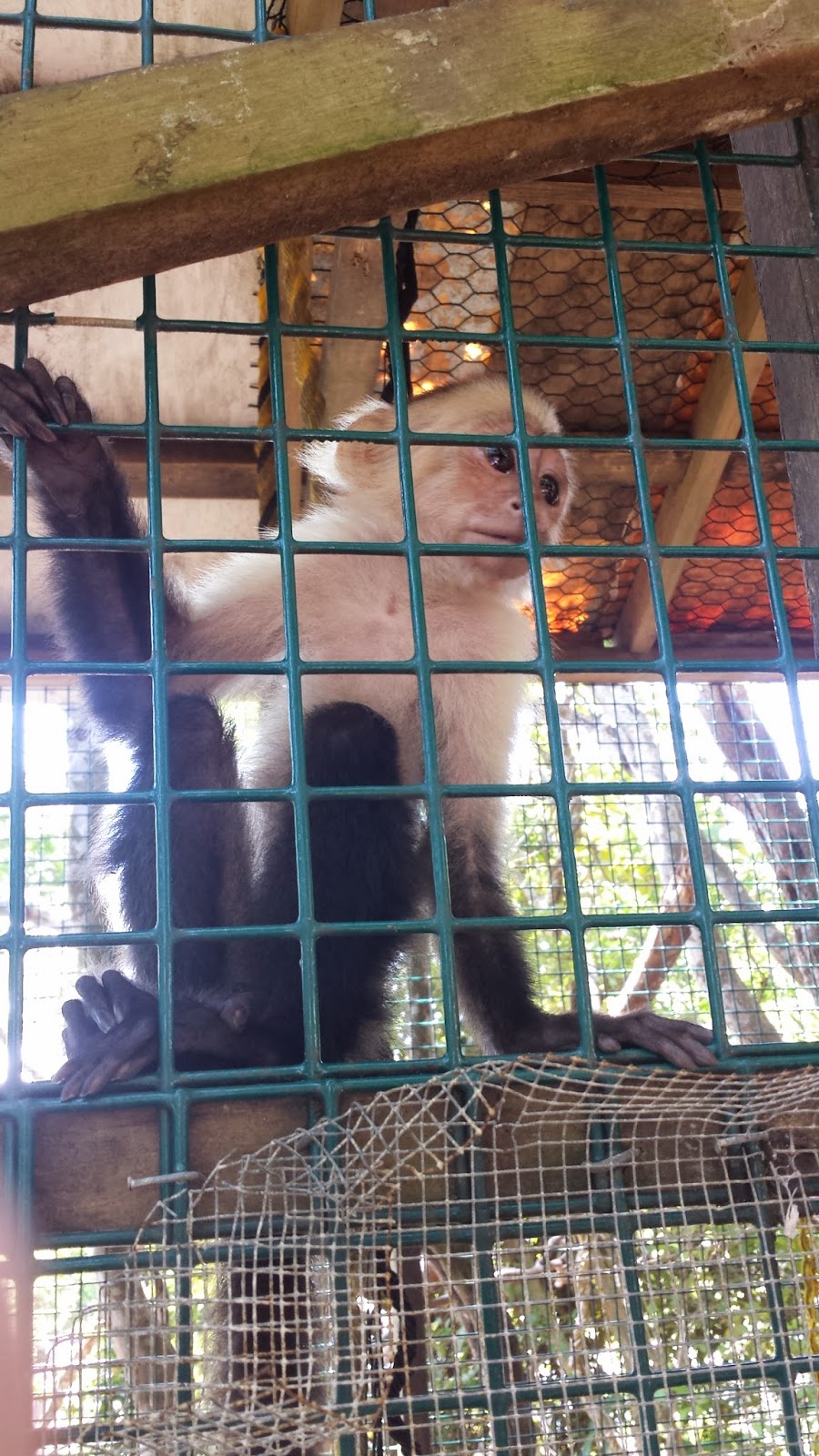 There is a growing lobster nursery and a tarpin fish cage, which Dave and Chris ended up getting in!! I would NOT get in here: 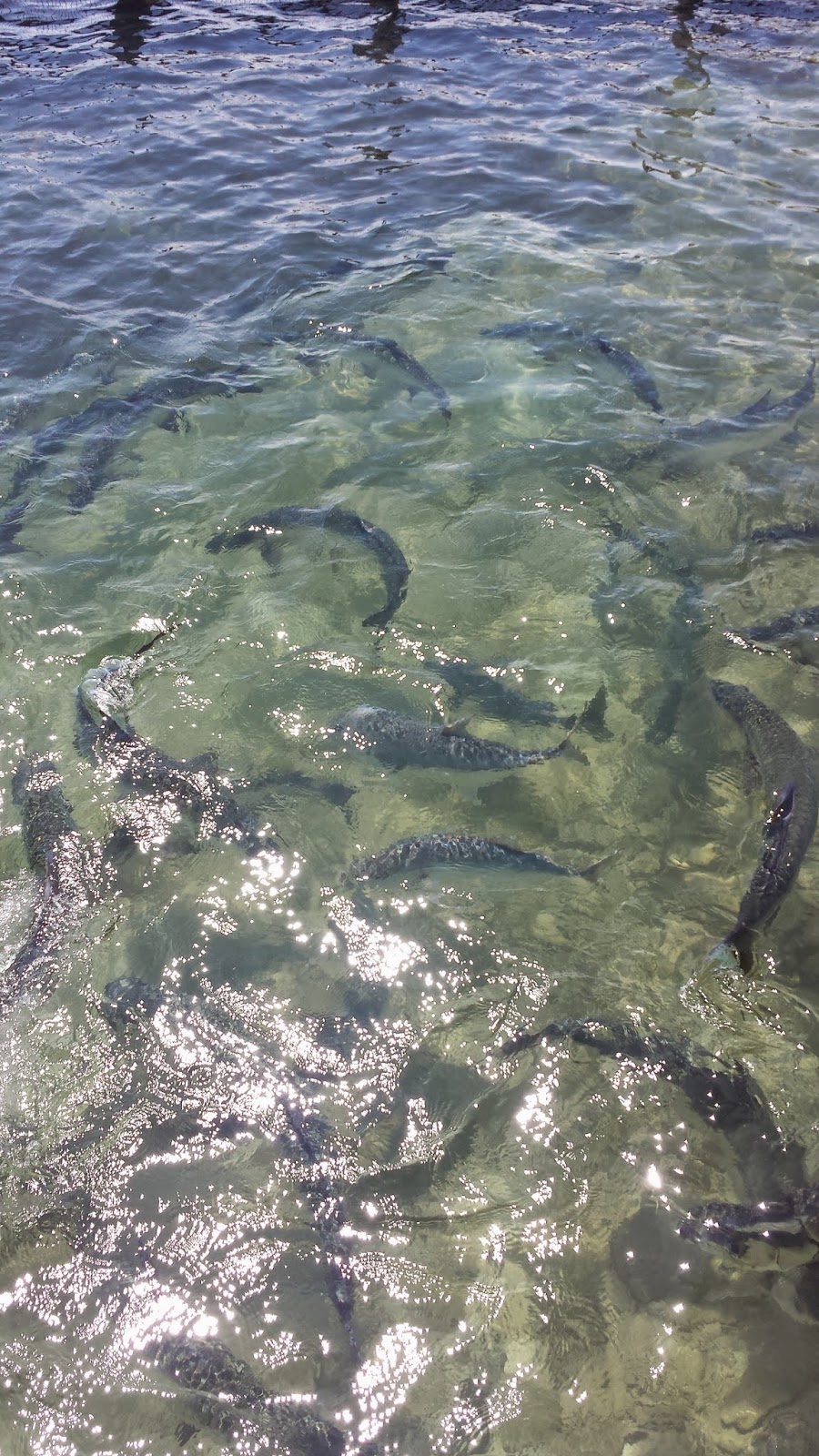 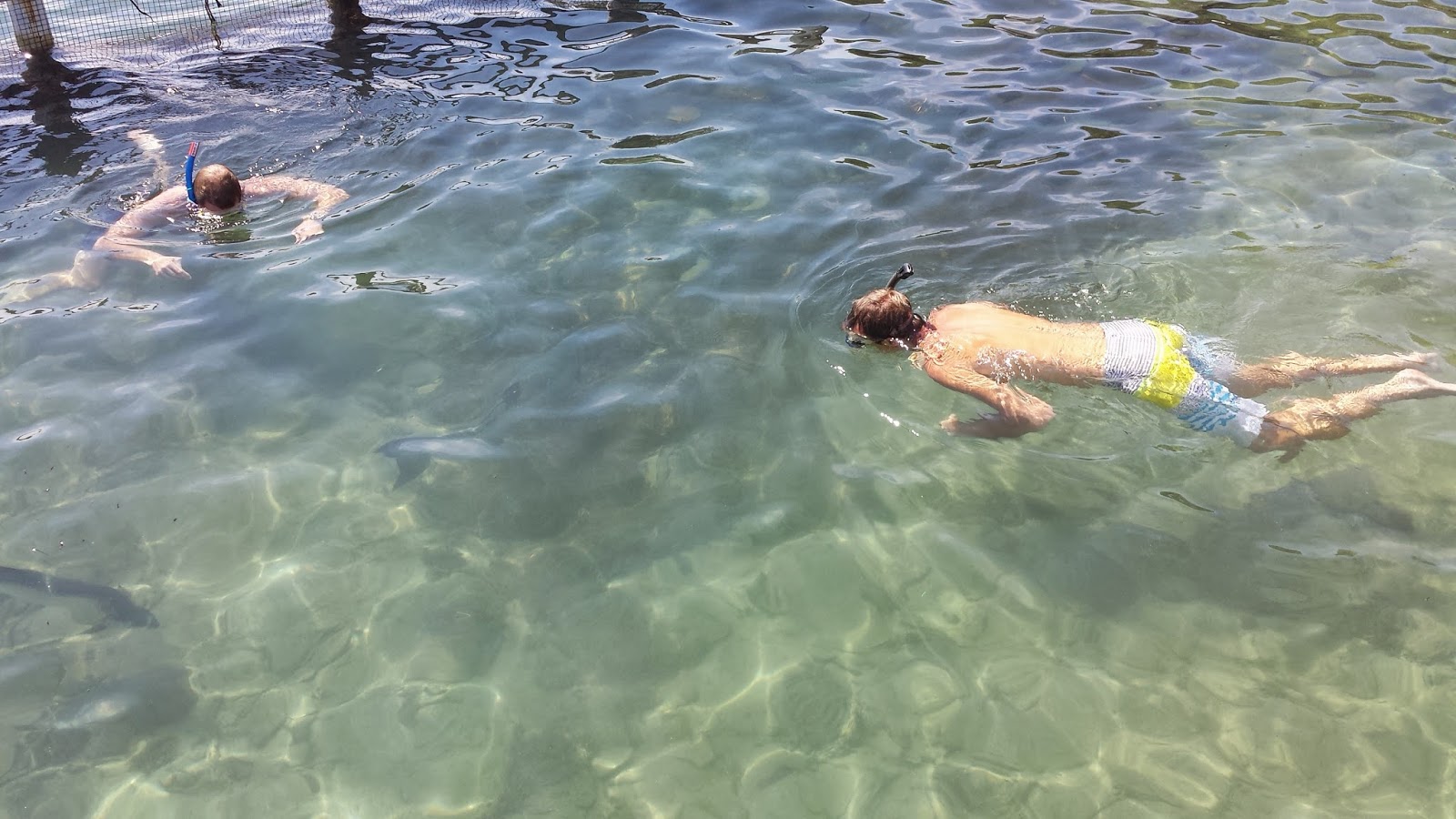 It was a really fun way to spend a couple hours. Sherman also explained that they reason you see so many “shipwrecked” boats–like this– 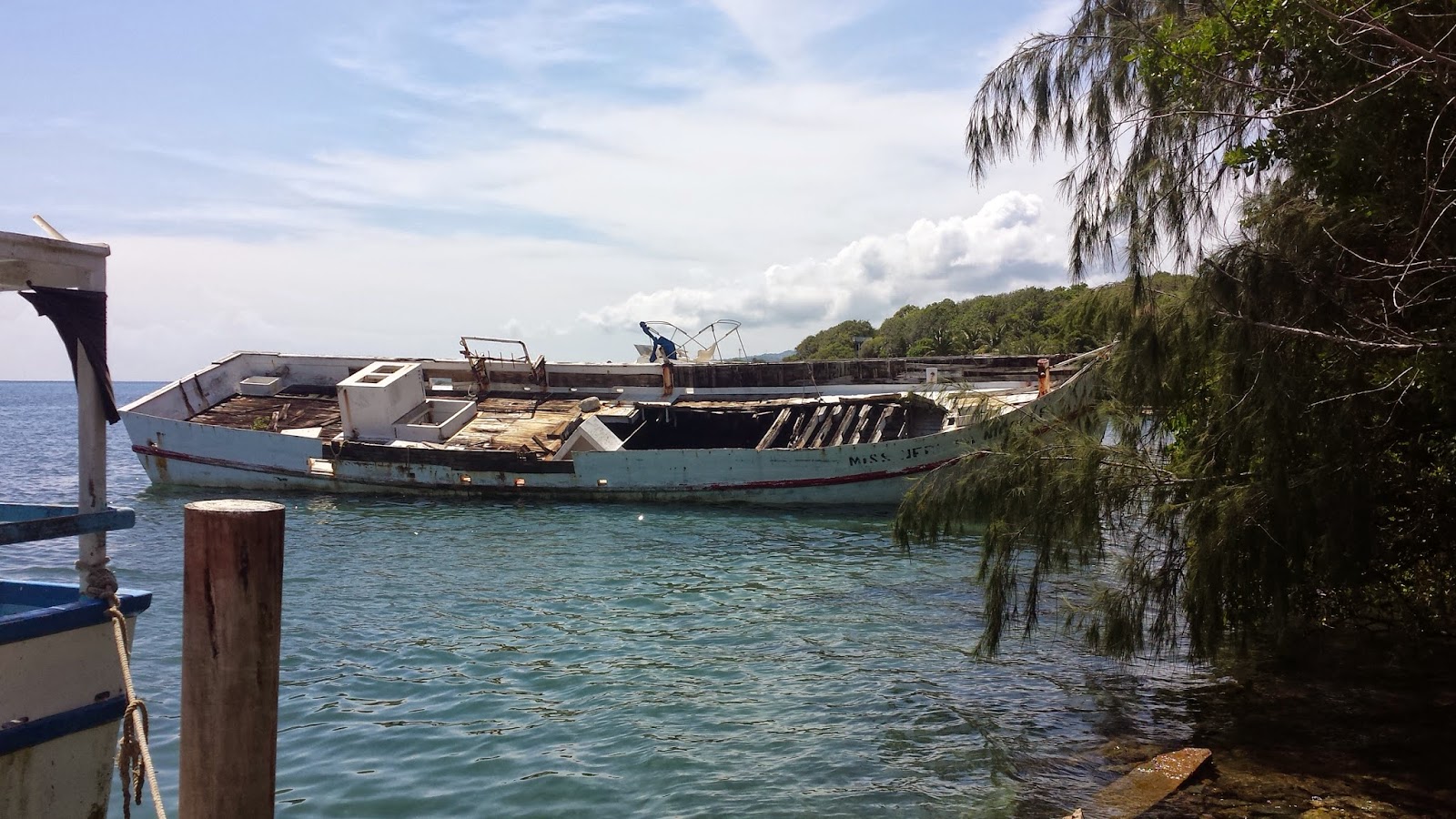 Is because they attract fish and lobsters. It is a pretty cool feature of the island, and while we didn’t get out and snorkel too much, this would be a great vacation activity there.
The next day, we went to see the Red Mangroves on a boat tour–this was very worthwhile. You will feel like your canoe boat will not make it through the mangroves—like this— 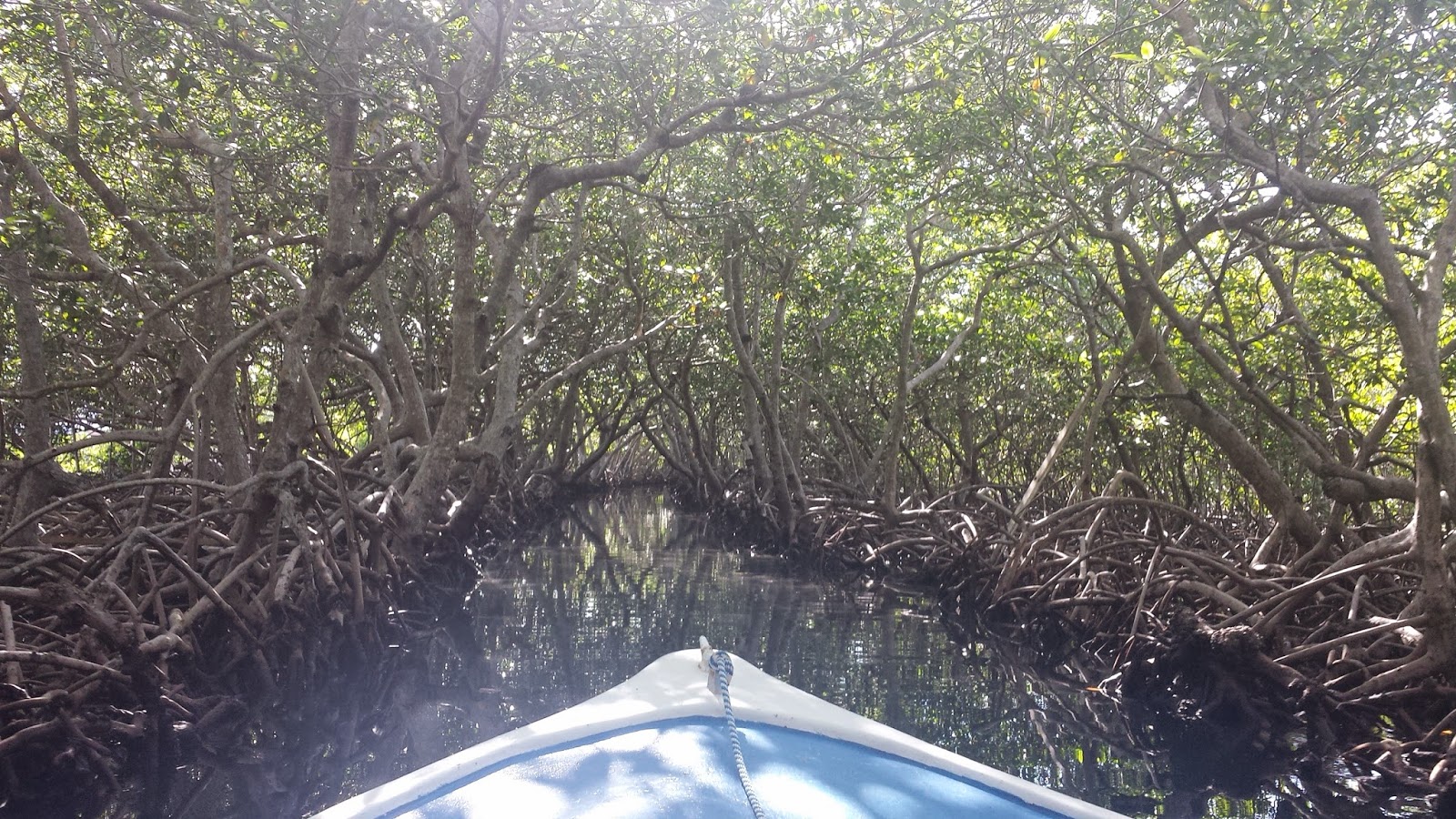 The mangroves are impossibly tangled! 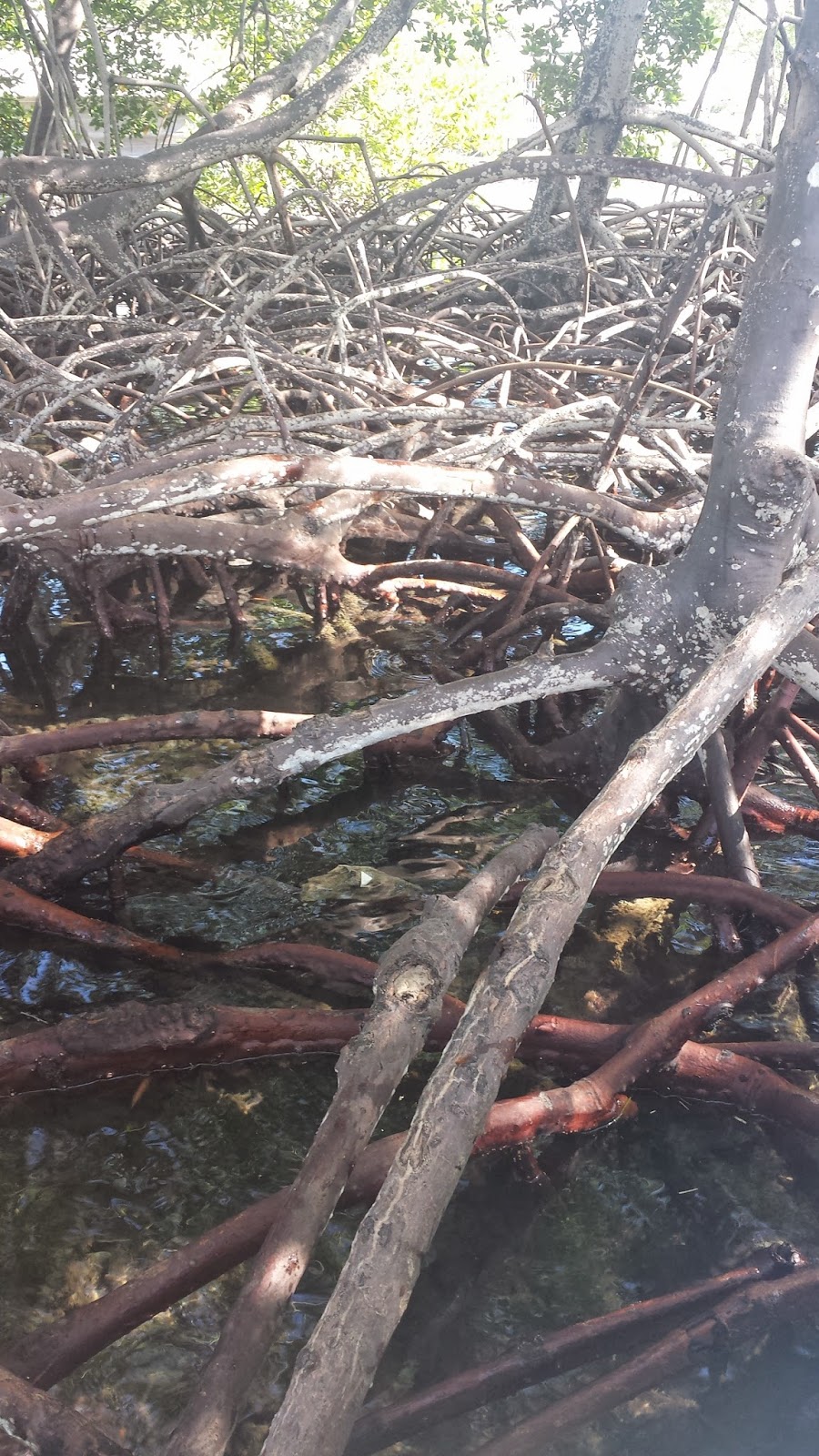 And while we didn’t see much wildlife, this is always possible in the mangroves. We were able to swing from a rope in the trees, and swim in the gorgeous bay: 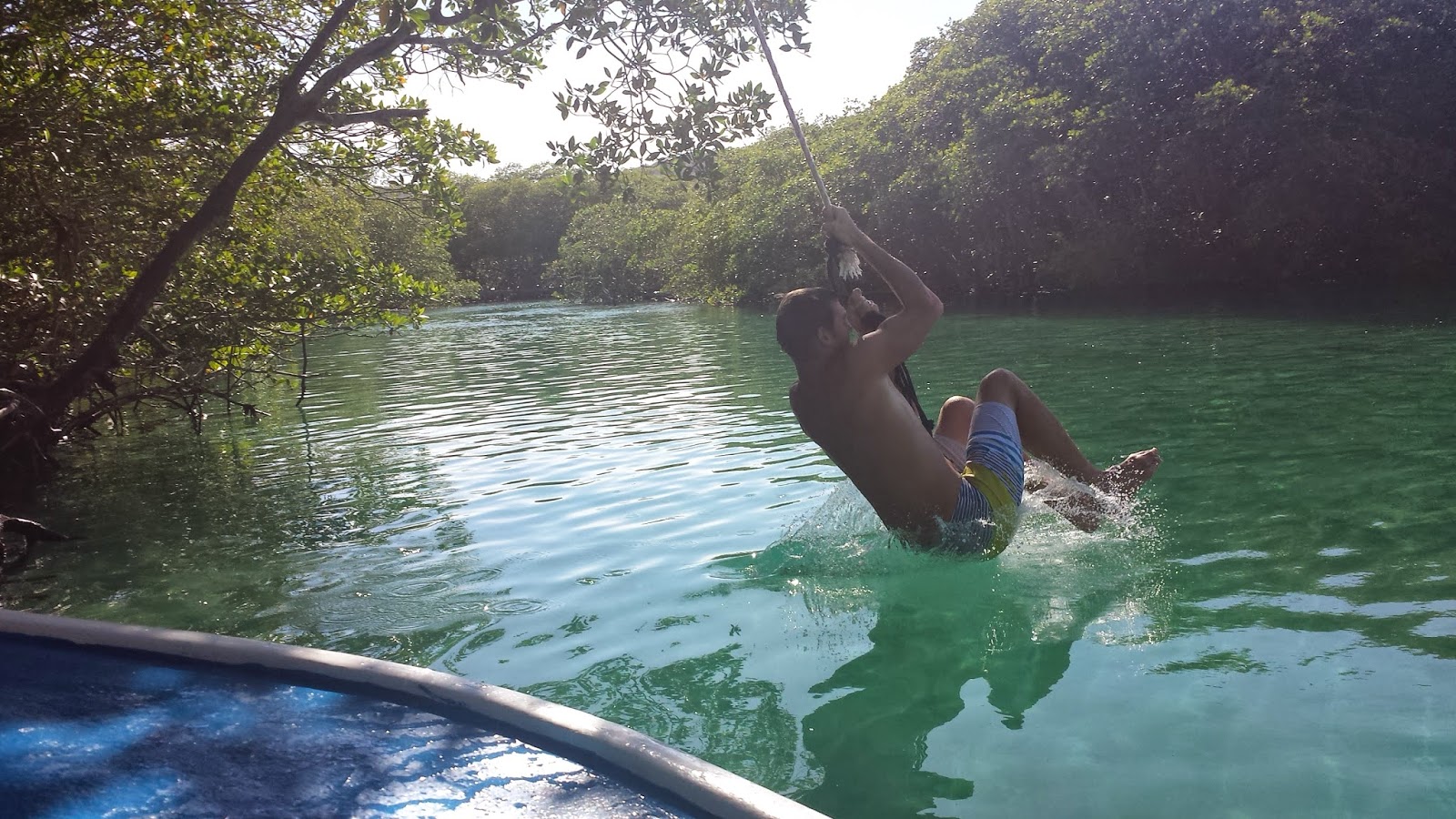 Sonia and Chris not having any fun:) 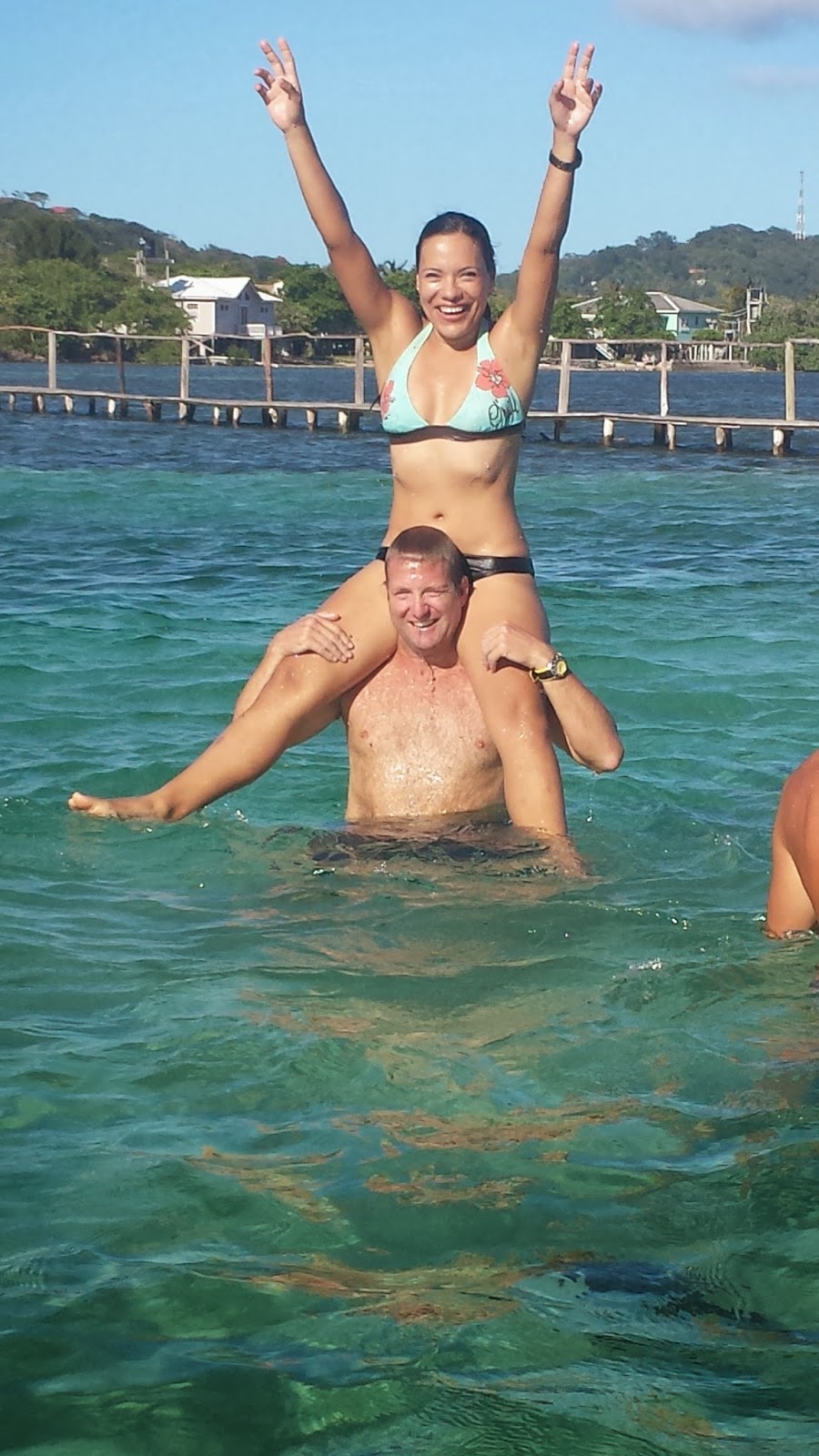 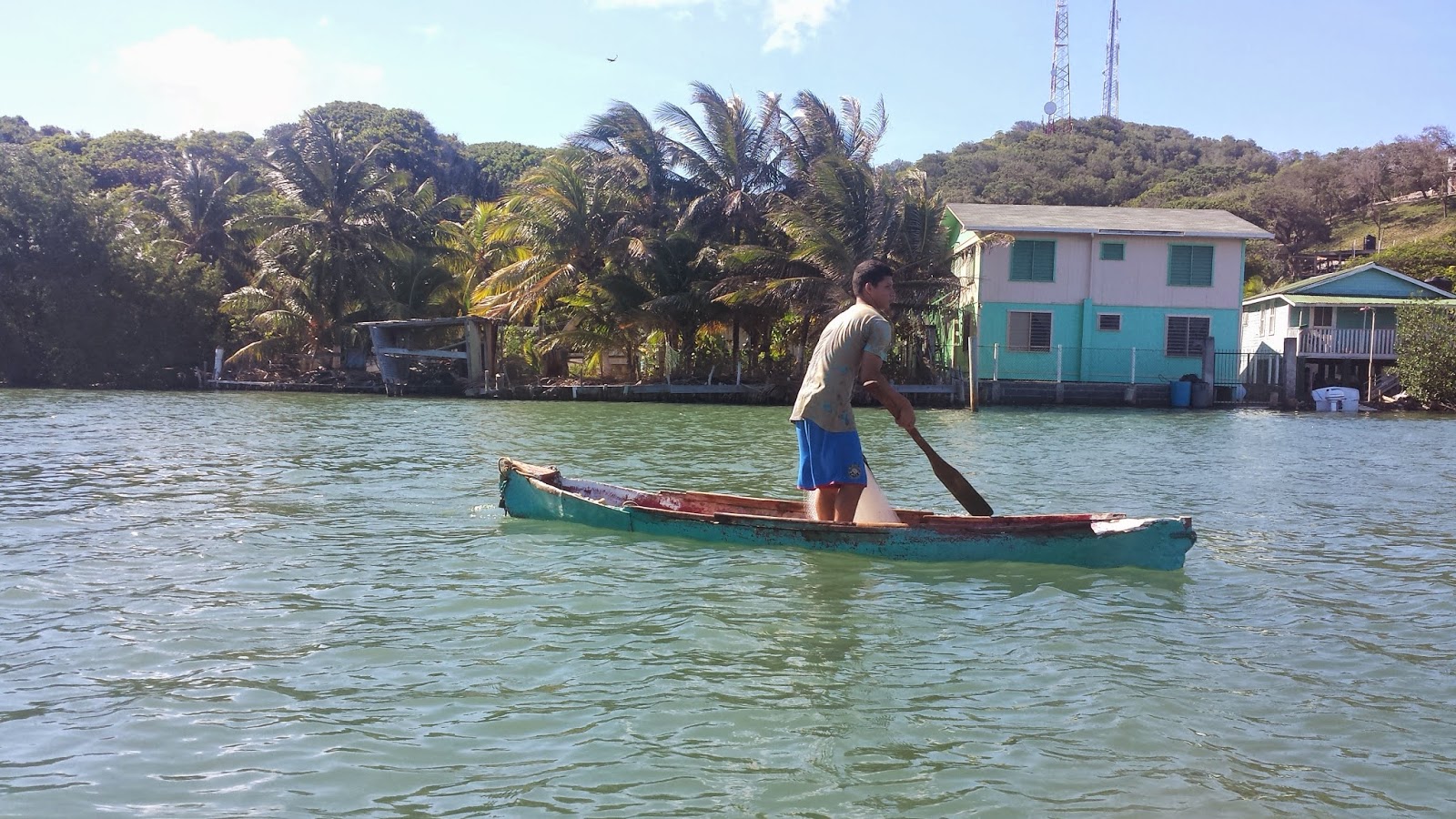 We ended this day at a place called the Hole in the Wall, which is a true hole in the wall. For $25 you can get all you can eat lobster tail….and we ate all of the lobster tails 🙂 This was a fun adventure, make sure you ask about the spooky story about the house behind the bar… 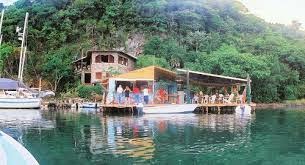 We also spent a lot of time at a bar called Sundowners, which is a very well known bar for good reason in West End. It is without a doubt, the prototype for all tiki beach bars; if you are into this kind of thing, and I am, this was the beach bar of my dreams. The setting, chairs, cheap drink prices, fun crowd, great guitarist, beach bonfire, everything about it was perfect. Touristy or not–I don’t think you could help but love it here. We went twice and would have gone again! 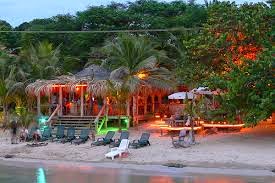 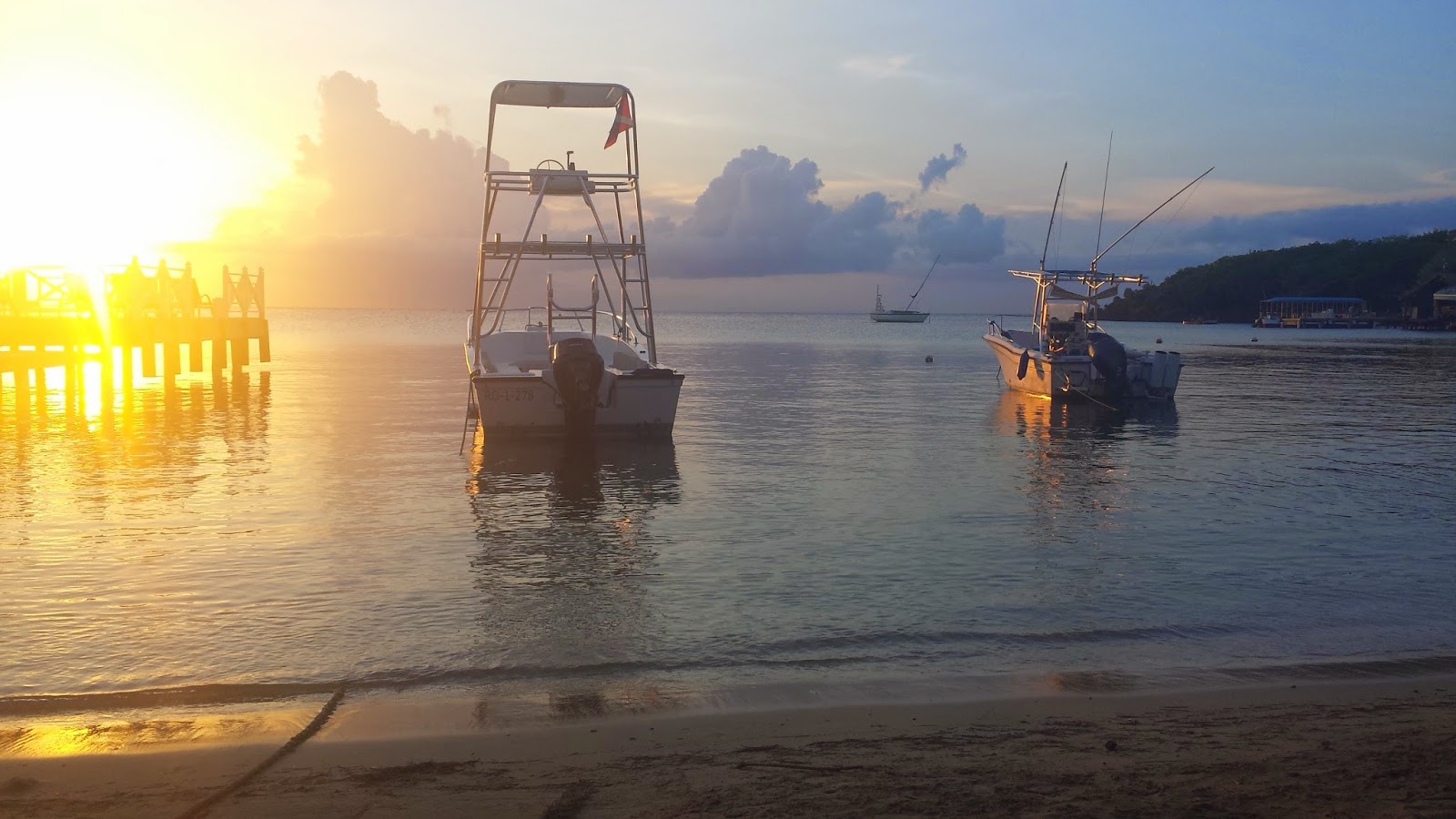 Overall, we wished we had more time, with a couple extra days, we would have taken the ferry to La Ceiba and then made our way to San Pedro Sula. Taking the ferry and renting a car would have been much more economical than flying.
Roatan is awesome and well worth a trip. A comparison if you are trying to decide between Belize and Roatan–a trip to the mainland in Honduras may only be for the truly adventurous, while in Belize you can experience many facets of vacation in one trip–jungle, ocean, water sports, Mayan ruins. In Roatan, you can do all this as well, but you are on an island. If you are a hard core snorkeler and are happy with a small area with a great tourist vibe, tons of energy, you would like Roatan. Belize is more laid back and rustic, more local flavor, Belize has no chains and maintains a charm that can’t be bought or built. The charm you find in built up beach areas definitely has its place, and Roatan was more exotic than Myrtle Beach or Hilton Head for sure 🙂 You will know you are in a Central American/Caribbean atmosphere, but just less of the local authenticity in Placencia. Both places are fantastic for their own reasons!

Some Eye Candy pictures of Placencia :)

Driving in Belize — Is it safe?